It’s all about endings – some a relief, and some utterly heartbreaking – in the final chapters of this book. This damn book.

Grab your tissues and join me to discuss the fate of our darlings.

Spoilers will follow for chapters 43 through to the end.

It’s all about endings, now… First up, Tyranny and Windfall. How do you feel about the way the self-made Queens of Tygrish went out?

Well. First of all, of course they survived. Of course they did. Stubborn wretches that they are – Tyranny especially!

I was glad to see that they both opted to finally side with our heroes for the final battle with the Jure’lia, even if Tyranny made a point of emphasising that it wasn’t her choice. That may have been true but she was still willing to do what her war beast wanted – and I knew Windfall had sentimental feelings for her kin! I’m sad that they didn’t live through it, but I can at least be glad that she got to return to where she was born and do the right thing, alongside her brothers and sisters.

As for Tyranny’s ending … was any other sort of “screw you” response to the death of Windfall going to do for her? I think not. It managed to be both awesomely epic and honestly touching, because it showed us that Tyranny did care about someone other than herself while staying true to who she was. So I may not be happy about it, exactly, but I can definitely appreciate how it played out.

*Sobs yet again into her keyboard* Oh, Tor.

I want to talk a little bit about him first here, because this is another ending that stayed true to the way Jen Williams seemed to be portraying him throughout this trilogy. In the same sense that we got a very female-gaze perspective on Tor early on, he is the one in the typically ‘feminine’ position of reacting to the Heroic Return when Noon turns up alive (THAT REUNION KISS, oh my heart), and likewise here: Noon is the one who decides that he needs to live, and makes the choice to be the only one in harm’s way when she reaches the Jure’lia crystal. It’s an almost passive role that is not typically played by the male protagonist in fantasy novels, and that kind of gender role-flipping is something I deeply appreciate, especially when it’s done so thoughtfully as it is here. Tor is not superfluous by any means, but it’s clear how much power and agency all of the women in this story possess, and he makes room instead of taking up more than his share, and I love the idea that he gets to be one of the ones who live to tell the heroic tale of the woman he loved, who saved the world.

As for Hest … that’s another thoughtful nut to crack. It’s a gloomier end for her to live and have to deal with everything she did, but I think it’s the ending she deserved. Noon could easily have decided to deal with her by simply killing her, but in that moment she had other priorities, and so Hest got to survive. I do suspect it was more mercy than she would have shown Noon had their roles been reversed, but that only serves to highlight those important differences between them, doesn’t it?

That all said, it touched my heart that the one thing that finally gave Hest pause and made her hesitate in her ‘mission’ was learning that her brother was dying, after all. This whole time she’d been avoiding the question of what she might do if it came to this sort of confrontation, and … now we know. Sort of? Because in the aftermath of it all, once again Hest chose to turn her back and not face whatever judgement her surviving people (her own brother) might have for her.

I don’t think it was quite that simple, of course. Hest was self-centred and petty, but I don’t think she was entirely heartless. However far she goes, I doubt she’ll be able to escape the hard truth of the damage she did. Even if she never goes home again, she can’t hide completely from the consequences of her choices. I don’t really know if that will sway her toward any sort of penitence, but we can imagine, right?

Celaphon makes a final choice in the final battle, after telling Hest that what happened to him wasn’t her fault. Do you agree with that? And what do you think of his apparent reason for his choice to turn on the Jure’lia at last?

Do I agree with his absolution of her: Not entirely? While I think that the Jure’lia queen would have used him as a weapon regardless of how willingly Hest went along with her, I also have to point out that all of this may never have happened to Celaphon if she hadn’t taken his egg and jumped ship in the first place. I chose to read that exchange as Celaphon essentially saying goodbye, while knowing that actually doing so might hinder his own plans because Hest would never have allowed it.

As for why he chose to turn on the Jure’lia … I have to admit that I WAS FINE until it became clear that he was doing it to try to show the other war beasts, the brothers and sisters who’d rejected him, how mighty he was. Because to Celaphon, this was The Most Important Thing, right? He was born almost fatally weak but he became something awesomely powerful (according to his bondmate, damn you Hest) and he never seemed to truly grasp how or why they could see his situation any differently. It’s a sincerely messed up iteration of the child, desperate for affection, causing trouble to try to earn attention because if he can’t have affection, the attention will do. And it absolutely wrecked me. More tears came later, of course, but this was the moment where I started actually crying because god damn it, this broke my heart. As soon as he said that, I knew Celaphon was going to die, because it’s just one of those lines, isn’t it? The fatal choice being met head-on, because what else is left?

*Blows nose into wad of tissues*

And finally … Noon makes the ultimate sacrifice, to save Ebora, to save her family, to save the world. How many pieces did this final act break your heart into?

*Muffled wailing into a pillow*

She was a desperate scrappy paranoid firebug who became an absolute badass hero and the world didn’t deserve her and I AM NOT OKAY AND MAY NEVER GET OVER THIS but it was absolutely the perfect ending to her story. I love that she clawed her way out of isolation and terrible treatment (abuse) to find a loving family, and true love, and self-control of her full power at last, and was the one to stand tall and take one for the team, in the name of all that love.

I just love her.

Any final thoughts? Overall impressions? Leftover feelings to mop up? Do share!

I seriously just want to thank Jen Williams for bringing Noon and all of her found family to life, and into our lives, in all these ways. Even though I also may not forgive her for COMPLETELY WRECKING ME OVER AND OVER AGAIN.

This is what the best writers do to you, after all. I am a fan for life, now.

God damn it, why is it done?! *Cries all over again* 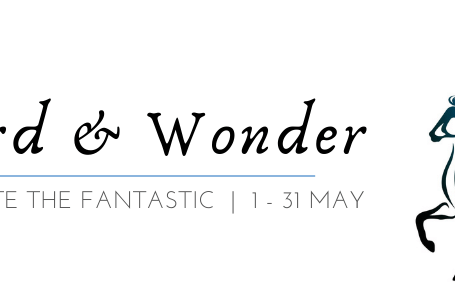 Precisely when I mean to: Welcome to Wyrd and Wonder!

4 comments On There and Back Again: The Poison Song Read-along, Part 5