What’s that? I’m writing a full review of a book for a change? Why yes, I am. Change is good, you know.

Today I’m breaking away from the (sort of) routine here to join a whole host of fellow bloggers and reviewers on Gollancz’s blog tour for the new novel by Garth Nix. More details, and my review, await below the cut! 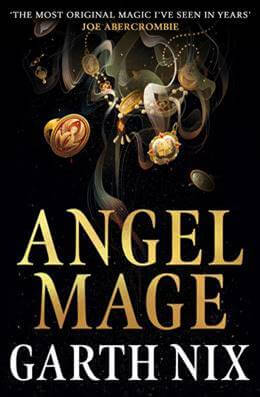 For any other, it would be an impossible quest. But Liliath is one of the greatest practitioners of angelic magic who ever lived, able to summon angels and force them to do her bidding. She also knows the truth: most of the inhabitants of Ystara died during the Ash Blood plague. Those who didn’t were transformed into beastlings … and she led the few survivors into neighbouring Sarance, herself. Now their descendants are shunned by angels for, when touched by angelic magic, their blood turns to ash.

But Liliath cares nothing for the descendants of her people, save for how they can serve her, and four young Sarancians have caught her interest.

Dorotea, an icon-maker and scholar of angelic magic.

The four feel a strange kinship from the moment they meet, but none know why, nor suspect that they will all become pawns in Liliath’s plan to fulfil her destiny…

When I first learned of it and received the promotional email from Gollancz for this blog tour, I thought Angel Mage sounded like just the sort of thing I’d enjoy reading. An old hand at fantasy world-building, who’d written a book inspired by The Three Musketeers? I hadn’t read any of Garth Nix’s books before now (despite having a copy of Sabriel on my shelf *cough*don’t judge me*cough*), but this sounded like a great way to introduce myself to his work.

So my first impressions were mostly good (and I’ll get to an explanation of that ‘mostly’ in a bit), and were definitely helped along by the dedication – and the maps, yay maps! – before I got to the story itself, in which Nix not only gave respect to Alexandre Dumas, but to the director and screenwriter of the 1973/74 film adaptations of the Musketeers stories (Richard Lester and George Macdonald Fraser, respectively), and to their cast and crew. Folks, if you haven’t seen these movies I would thoroughly encourage you to find them and watch them – The Three Musketeers (1973) especially.

This brings me to the ‘inspired by…’ aspects of Angel Mage that I enjoyed and appreciated, and there were a good number of them! From the more obvious nods, used as what I felt was a cleverly subversive approach, to the elegantly crafted homage moments to those films, it’s clear that Garth Nix took this tribute more seriously and put more thought into it than just a bit of surface polish.

The obvious nods: several characters who stood out as adapted versions of Dumas ‘originals’ (himself considered or known to have based his characters on real people) – Captain Rochefort, Cardinal Duplessis (Richelieu), and a few others who don’t share the names but whom I’m fairly certain are based on Dumas’s characters. For example, Agnez reminded me immediately of D’Artagnan, for reasons I figure will be obvious to any readers familiar with him (and never mind that the Captain of the Musketeers shares his name, I stand by my assessment). What I like best about these character adaptations is that most of them are gender-flipped, and/or represent a flipping of the balance of power. Rochefort, the Cardinal, Agnez, and Captain Dartagnan are all female. Rather than allowing the King to be a figure of absolute power, albeit one who is heavily ‘advised’ by the Cardinal, it’s the Queen who is given this role.

What hasn’t changed is one aspect of the Musketeer stories I enjoyed best, particularly from the most recent BBC series adaptation: the subtle (and not so subtle) power plays that go on either behind the Queen’s back, or under her nose. Dartagnan and Rochefort, as the commanders of opposing military forces, are clearly well aware of the power dynamics and are equally crafty about playing their hands, neither refusing to give an inch without a ‘fight’ but, perhaps more importantly, both doing so in order to serve a greater good, however competitive they may be.

This brings me to the ‘loving homage’ parts, and one of the standout scenes for me is one that definitely reminded me of the cleverness of Lester’s 1973 film. In Nix’s book, Agnez and Henri find themselves at odds with a pair of very drunk Pursuivants (members of the Cardinal’s Guards), and while Agnez would clearly be happy to duel them both, Henri talks their way out of it by using arithmetic and manners against their drunken opponents (“Only one with a sword … not the done thing…”). The scene really has to be read in its entirety to be fully appreciated, but appreciate it I most certainly did.

While I’m on the subject of characters and their cleverness, however, I should highlight a relatively small … niggle, I guess? I’m not sure it’s really a complaint and I hesitate to call it a criticism, mainly because I’m not entirely sure it wasn’t a deliberate choice on the author’s part, but after finishing the book I was left a little bit dissatisfied by what I feel is a lack of character depth, or perhaps a lack of more depth of interaction between the book’s four protagonists. I enjoyed what we saw of their bond and how it endures through all the adventure and peril and whatnot, but I would have appreciated more time spent with them, getting a bit more than the somewhat basic understanding of them that we do get. Scenes like the one I described just now are grand, but comparatively isolated; overall, these characters felt a little too passive for my liking.

And that, in turn, brings me to Liliath.

(Hi there Milady de Winter, yes, I see you.)

Liliath had all the potential to be an amazing villain. She’s devious, deadly, and dangerously intelligent given her prowess with angelic magic – and yes, the magic system here is really interesting. My problem with her is that her motivations seem basic, in light of all that she’s apparently capable of. Put next to the rest of the book’s powerful, capable women, Liliath seems almost underused – which is a bit frustrating, given that she is the book’s main antagonist. There are intriguing glimpses into her potential depths, but her main goal and motivation stem from her “love” (read: obsession) with restoring her archangel to power, after some experimental ritual went awry generations earlier and almost destroyed him.

But why? Why, when she could clearly do so much more with an archangel in her pocket, is she merely an infatuated “maiden” looking to reunite with her one true love? And yeah … don’t get me started on the troubling implications of that power dynamic. Also I immediately had to question the fact that this book’s antagonist appears flawlessly young and beautiful throughout.

Why is she the only powerful woman in this book who gets to be pretty? I mean, I know there’s a (technical) explanation for it, but it left me a little dissatisfied. Let her show her age! Lend her more gravitas. It worked for the Cardinal. Instead what we have is a powerful and ambitious mage who essentially spends most of her life (willingly!) in a box (literally!) until the time is right for her to Be The Villain.

The thing is, though … I can’t decide if this is a genuine flaw in the storytelling, or just a legitimate choice for her character. I look at all of these powerful (and flawed) female characters, and I love the fact that they’re written into the story this way, and I have to suspect that Nix’s portrayal of Liliath in this way was deliberate. After all, adventure stories in the mold of Dumas are perhaps not known for their multi-faceted, deeply complicated villains – and Liliath, to be fair, is largely defined by her obsession. It’s the only thing that matters to her, so in that light it makes sense for Nix to take this approach to writing her.

If this is in fact just another nod to a well-loved adventure tale (again, she’s clearly Milady de Winter), then I’m here for it. Sometimes all you want is a fun romp, some literary popcorn to snack on rather than a three-course meal, and an obvious bad guy to hiss at. But after enjoying all of the world-building and the character subversion (Rochefort isn’t a complete asshole and I love it!), Liliath came out of it feeling a little sketchy, a bit of a flat note. So I was left a little unsatisfied by her, and by the resolution of her story, there.

All in all, this is a fun, and occasionally very funny, tribute to a story I love. It’s one that has taken so many forms over the years, and I shan’t complain about this one joining that particular archive. Garth Nix has built a fascinating world around, and a clever magic system on top of, one of the most well-known and best-loved adventures in literature, and has done it justice in that it’s clear to me how much he loves it too. Nothing about it is slavish fan service, however; the subverted elements do acknowledge problematic aspects of a story written more than a hundred years ago, and give it a feminist twist that I appreciate deeply.

Is this book perfect in my eyes? No. But perfection doesn’t exist. The best any author can hope for is that a reader will enjoy, appreciate, and even love their work because they engaged with it, flaws and all. This reader did so, and for that I thank the writer. I still have questions, but I suppose that’s what re-reading is for, am I right?

Now I suppose I should get on and finally read his other books!

In the meantime, why not check out other stops on this blog tour? 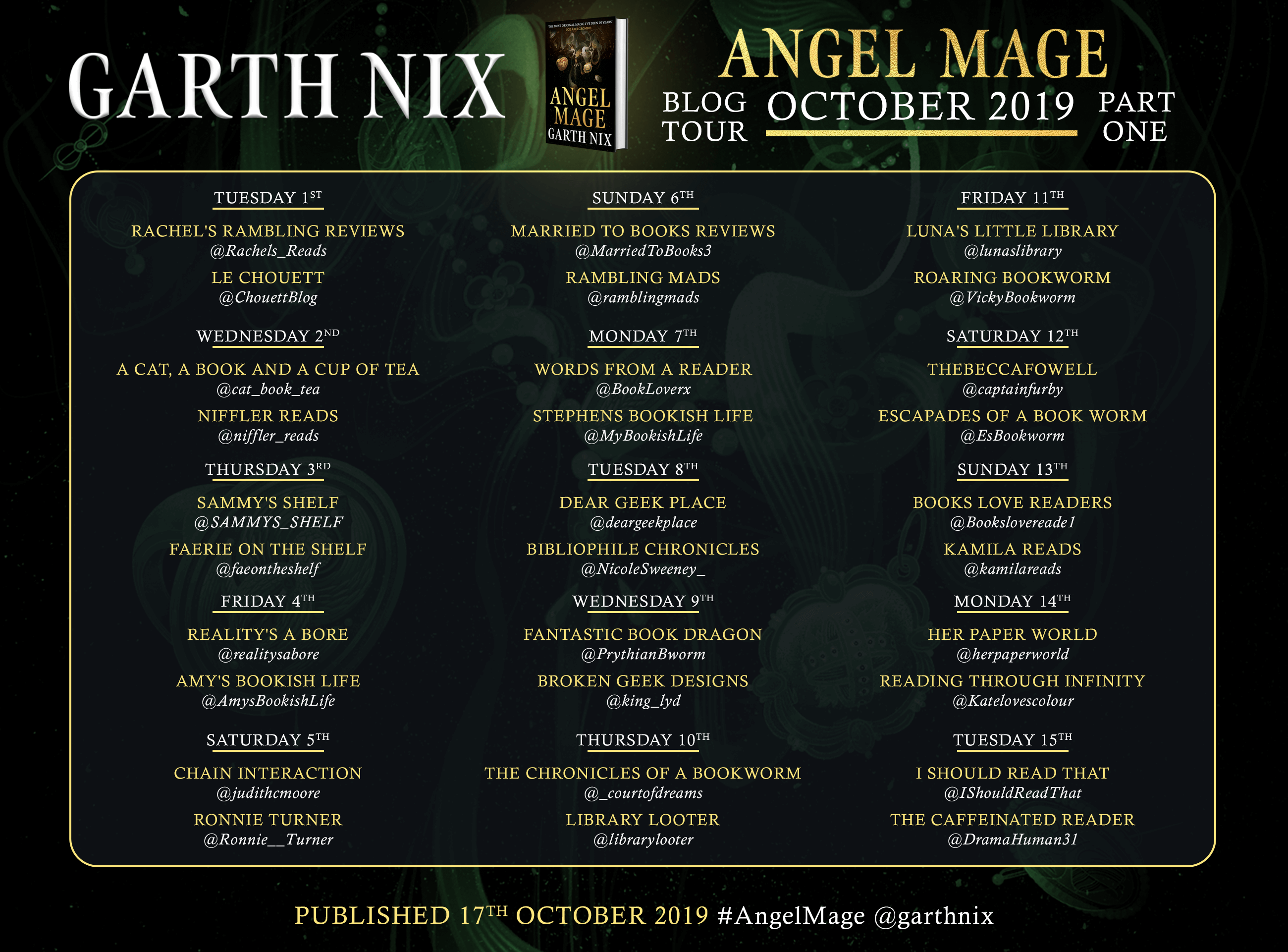 Disclaimer: I received a review copy of this book from the publisher in exchange for an honest review.