It’s been a difficult month in terms of getting anything actually done, to the point where I’ve had to step back from some things and use my time to just breathe, regroup and try to focus on the next thing, and hope to return to the unfinished things when the brain weasels will allow it.

But if there’s going to be time to breathe, it’s probably good that it was now. October is a day away, and I’ve got things to plan for, friends.

Let’s recap September, and get on with it…

The Poison Song Read-along continues at a nearly frantic, desperate-to-finish-this pace – because apparently that is how Jen Williams rolls. This reader is certainly not complaining, as my posts discussing this book will attest! At the point of writing this, the big finish is right around the corner, and I can’t wait.

Another book (and trilogy!) whose finale I’m fast approaching is Dreams of Gods and Monsters, and while that’s going a little more slowly, I’m still having plenty of thoughts and feelings about it. With a little luck and a little more persistence, I can clear this one off my slate before Spooktastic Reads begins.

Then I’ll have to turn my attention to what book/series to replace this with on the First Reads agenda, but I have some intriguing options! The front-runner right now is Throne of Glass by Sarah J. Maas, but who knows what might catch my eye well enough to overtake it? Watch this space. 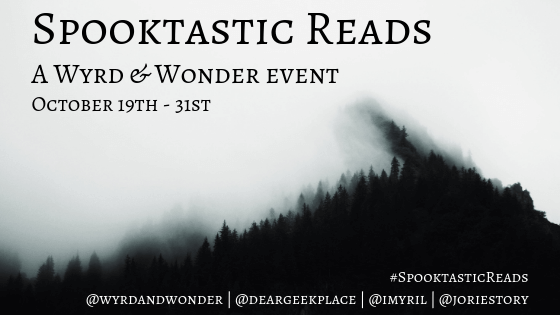 I am seeing the stirrings on Twitter of TBRs being prepared and plans being made for the second outing of our Wyrd and Wonder little-sister event, and it’s giving me some joy to anticipate more nerdy goodness! There’s no official sign-up for this event, but if you’d like to skelebrate the lead-up to Halloween with some ghost stories, monster-filled urban fantasy or straight-up horror, pick your poisons and join us!

SciFi Month is also returning in November, and sign-ups are officially open! Click the link to join the Fleet, and also to enter our sign-up giveaway! Details are still forthcoming on prizes, and on special blog events in the works…

I’m doing something new and exciting and only mildly terrifying (so far) next month! I’ve been in touch with a Twitter spokesperson at Waterstones Braehead, who are organising an evening of discussion focused on Erin Morgenstern’s The Night Circus, prior to the much-anticipated release of her next novel, The Starless Sea, in November. I have agreed to host the book group, which will be held on Friday, October 25th at 6pm. If you’re able to join us, I’d love to see you there! Tickets are free, but booking is required.

Our September D&D session saw Team Crowbar live up to their name yet again, during a return trip into the Weeping Mire mountains, to help a group of highly trained bards and their bodyguards investigate further into our encounter with the zombie tieflings in their giant hamster wheels. The intrepid academics were thankfully persuaded not to start experimenting with whatever source of evil power we’d stumbled upon, and after forcing open a door into a very securely locked room it turned out we were not wrong about the source of evil power. One empty but seething, disturbing egg-chamber (big empty room, shaped like an egg, with … tentacles?! impressed upon the walls OH NO THAT’S NOT HORRIFYING AT ALL) later, we decided maaaybe it was best to leave…

Things are getting deliciously complicated, and we haven’t even really touched on the apparent signs of communications sabotage around the outskirts of our land… So trouble is coming for us, but where will we be and how much will we know when it does? And who, exactly, will be causing it…?

If you’ve enjoyed any of the content I post and would like to show support/help me continue to be a massive book nerd/assist me in keeping the lights on at the Geekhaus, I have a Ko-fi account you can drop a few (entirely voluntary!) quid into, with my eternal thanks!

From our ship, we live: Record of a Spaceborn Few Read-along, Part 2