It’s been a difficult month in a string of continuing difficult months, but there have been a few bright spots in it for me, and I have … tentative plans?

Let’s look at what June did.

A slow start to this challenge, but I did get one book read and am about to embark on a second!

Turning Darkness Into Light by Marie Brennan is a next-generation follow-up to her Lady Trent series, which I absolutely loved. This book was everything I wanted from such a novel, and then some. I even loved the unapologetic linguistic nerdery it contained – and there was, inevitably, a lot of it! I ate it up along with the character drama, and cannot recommend it highly enough.

Next up: The Grand Tour by E. Catherine Tobler!

I’d almost forgotten about this, to my shame. But I’ve looked over my list again, and decided that rather than tackling my selected books in numerical order I’m going to random it up, because that’s just how I roll. So first up from this list will be Gods of Jade and Shadow by Silvia Moreno-Garcia. That’s on my slate for July along with a couple of ARCs that demand reading.

No progress to report yet on this, but my next selection (since the first book is on another challenge TBR list) will be NK Jemisin’s Broken Earth trilogy, starting with The Fifth Season!

The Voyages of Cinrak the Dapper is a collection of stories I had no idea I needed in my life as badly as I did. I tried a few times to put together a coherent full review, but honestly, it all comes down to wanting to thank A.J. Fitzwater for writing this book. I take the view that everything is political, but with the state of world politics being what it is I had lost sight of the fact that, as A.J. puts it in the introduction to this book, “joy is political”. It is possible to put positive art into the world that also makes a political statement, and the reminder that there are things like joy and wonder and good relationships to be found out there could not have come along at a better time for me.

For any writer to be able to take this approach to building a collection of fantastical myths and legends in their own fictional world (and that is what Cinrak’s voyages read like, to my eternal delight), and never let the underlying message weigh down the tone, is an incredible show of skill. I want more Cinrak! 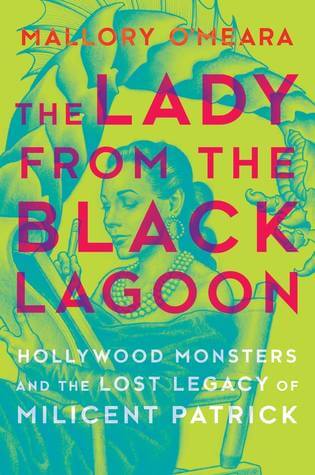 The Lady From the Black Lagoon by Mallory O’Meara was one of those books I’d had my eye on ever since it first came out, but the fact that it didn’t have a UK publisher made it tricky to acquire without resorting to Amazon. Thankfully I recently snagged a paperback copy through The Portal Bookshop (amazing LGBT+ bookseller based in York, check them out if you haven’t!), and it very quickly became one of the rare books I have to take to work with me because I can’t bear to not be reading it. Several breaks and one very dedicated late night later, it had utterly blown my mind, given me copious emotions, and even made me cry a little bit.

Mallory O’Meara is an excellent storyteller whose passion for this subject matter (in all of its aspects) shines on every page – and that really struck me because this is not merely a book about Milicent Patrick’s life and sabotaged career. It’s a Me Too account of what it’s like to work in an industry where patriarchy still has an iron grip on progress. It’s also a horror nerd’s unbridled show of love for the genre; she shares geek trivia and displays good humour with the same ease that she conveys deep frustration at her professional environment’s feminist failings, but all of it clearly comes from that same deep well of love. There’s not a dull moment anywhere to be found here, and I appreciate it very deeply. This is the kind of non-fiction I’m here for.

As of writing this, we’ve had to reschedule our monthly game and so have not yet played – hopefully we’ll be sitting down to roll dice next weekend instead. But when we left off last time, we were in a small village in the mountains where they’ve been having problems with increasingly bold bands of roving wolf-creatures, so it looks like it might be up to our party to help them get rid of the problem.

I am so ready to smash some monsters, you guys. So ready.

What else is there?

Well, there is this. In case you missed it.

I am working on a potential New Thing to help celebrate the LGBT+ community, through SFF, and also to raise funds for a couple of organisations: The Trevor Project, and LGBT Youth Scotland. It will require some preparation and the acquiring of some gadgets, but I am playing with the idea of a streaming marathon in which I read queer SFF stories on camera, with a fundraiser attached. The thought of putting my face live on the internet and doing a lot of talking makes me somewhat nervous, but I’ve got a fire under me for this idea so I genuinely hope it sounds good to you guys! Stay tuned for updates.

Also, if you already like this idea and would like to help me out with the preparations I mentioned (I want to invest in a microphone/webcam setup and do this properly), I have a Ko-fi account that you could drop a few quid into, with my eternal gratitude.

Timing is everything: A review of Love Bites by Ry Herman