Timing is everything: A review of Love Bites by Ry Herman

It’s time to turn on the lights in the library and find a space on a shelf, because today I am talking about a book that has, curiously, taken up quite a bit of space in my mind since I read it.

That book is Love Bites by Ry Herman, a queer romantic comedy published by Jo Fletcher Books and provided to me in ARC form for a review (thanks, guys!) as part of their blog tour.

What do I mean by “curiously”? Well, let’s discuss that…

CONTENT NOTE: This review discusses issues of physical and emotional abuse, depression, and anxiety as presented in the book, as well as a date rape allegory used in the book. 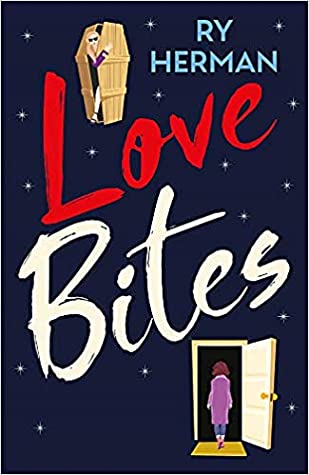 Two years after a painful divorce, Chloë is still struggling to leave the house, paralysed by anxiety and memory. So when she’s bullied into a night of dancing by her busybody aunt and finds herself in a goth club, on her own, in a strange part of town, she isn’t looking for anything more than to pass the time until she can leave.

Then she meets Angela, a smart, beautiful astronomy Ph.D. student whose smile makes her heart pound. In Angela’s eyes, Chloë can see a future. Suddenly, home alone is the last place Chloë wants to be. Trouble is, Angela can only come out at night. Angela doesn’t feel the cold, or eat. Angela has sharp and deadly teeth.

Angela and Chloë might just be perfect for each other. But how do you build a life together when one of you is already dead?

Judging by that back cover copy, this book sounds exactly the way it was pitched to me, as a “tender and unforgettable … feel good queer romance with a surprising paranormal twist” (as per the promo email I received). And it is indeed all of those things, though not quite in the manner I had anticipated.

Don’t worry, this is going to be a good review of a really good book. I just have to talk about the … oddity of it? At least, the oddity from my point of view.

Let’s take Angela and her story first. Angela is a passionate astronomy student with a goth aesthetic, and thanks to a horribly abusive past relationship, she’s also a vampire. She’s presented as the perfect candidate for stereotypical vampirehood, perhaps: she already dresses in black, immerses herself in goth culture, and she’s studying astronomy so only coming out at night is surely not a hardship, right?

But almost right away, I got a bit stuck on the matter of that past relationship. That, plus certain aspects of Angela’s own behaviour, clouded the humorous angle of this book for me. To put it bluntly, Angela deals with the issue of having to drink human blood by going to bars and clubs, choosing a ‘safe target’, spiking their drink under the pretence of flirting/getting to know them and taking them somewhere quiet to feed.

There is no escaping the predatory behaviour this method evokes, and to continue being blunt, there is nothing funny about it – though to be fair, and to the author’s credit, it’s not played for laughs. Angela is never entirely comfortable with what she feels she needs to do, and she puts off feeding for as long as she can. But the fact remains that this is how she chooses to do it, and whatever the social justifications in her situation might be, it’s still a violation.

However, I can (somewhat) appreciate that being a vampire is not presented as sexy or romantic here. This isn’t that type of vampire love story, and I’ll admit that my feeling of being caught off-guard by it has a lot to do with my own past relationship baggage. I’ve been in an abusive relationship; I know how much fun it isn’t. Angela’s ex-girlfriend, the vampire who turns her, is never presented as sympathetic beyond the scenes in which Angela first meets her, when she’s the beautiful, intriguing, swoon-worthy object of Angela’s head-over-heels fascination. Because isn’t that always the way?

Content note addendum: The book’s opening scene describes, in plain and entirely un-romantic language, the process by which Angela dies and becomes a vampire. It reads more like ‘scene of a crime’ than anything Dracula-esque, and while I can appreciate that approach, it was naturally the first hint I got that this was perhaps not going to be a cute, fluffy story…

So in that light, there is very little that’s funny to me about Angela’s story, and that’s as it should be.

If Angela hits my aesthetically-pleased buttons, then Chloë is the character who hits me in the emotions. She’s also dealing with the fallout from a terrible relationship, but she’s doing it with a big old double-scoop of those old pals, depression and anxiety. Her house is a mess, she never goes out, she deals with it by burying herself in work (she’s a slush-reader for a publishing company, hello nerdy appreciation) and in denial.

She also ends up with two housemates in the form of a roommate who helps with the rent and is an angel? Apparently? But he’s not very good at it, though I absolutely appreciate the wry irony of an angel who tries to make a go of the street preacher life while bumbling through the guardian thing and … is not very good at that either.

The second roommate is Chloë’s aunt, who turns up out of the blue claiming she just needs to stay overnight on her way elsewhere and ends up staying. Oh, and she’s a witch who has been alive far longer than most mortals? She’s got some stories to tell, at any rate. And while these two characters undoubtedly shoulder the responsibility for the ‘comedy’ side of things here, I have to admit I spent more time giving them the amused side-eye than I did laughing out loud.

That’s absolutely not a bad thing, to be clear! Humour is entirely subjective, and were it not for the fact that I’d already been put on the back foot by the aforementioned sensitive content, I might have found it all funnier.

As far as dry, quirky humour goes, however, Ry Herman does it well and I have to declare that I’m here for it. In a rather curious way. For a pair of characters whose purpose is apparently to help smooth the way for Angela and Chloë both to find a happier path in life, whether together or not, they keep to that purpose and don’t overshadow the central romantic aspect of the book – but I want to know more about them! I want to follow the bumbling, wandering, goodnatured himbo angel to wherever he goes next and see what happens when he gets there. I want a story about the meddling, tarot-reading auntie who tells tales about having flings with Marlene Dietrich and Julie d’Aubigny.

But we’re talking about Angela and Chloë here, and to my relief, from the point where they meet, fall in attraction and eventually fall in love, the story does climb toward a brighter, more positive point. I have a deep appreciation for romance novels because while they’re often perhaps formulaic, they are also deeply comforting. If there’s the guarantee of a Happily Ever After, then I don’t have to worry too much about what might happen before the characters get there. And while this formula is there for these two characters, I felt the lack of that kind of reassurance along the way, a little bit. (Looking at you, Ex-Girlfriend Tess.)

I’m absolutely putting this down to my own personal reactions to the darker aspects of the story, though – your mileage may vary. I’d simply feel like I wasn’t being entirely honest if I didn’t say that Angela’s treatment at her ex-girlfriend’s hands, and her own treatment of the people she feeds upon – one such example is included on-page – made me profoundly uneasy at first, and that this had an undeniable effect on how I felt about her, moving forward.

(Despite all this, she’s still not much like her ex. Thank all the gods.)

I am glad Angela and Chloë find each other, and find happiness with each other, and given the issues they both have I’m glad that their path involves the kind of vulnerability that lets them heal and move on, together. That’s the kind of romance I’m here for. But in retrospect, considering the whole package of this story – I wish I had had a bit of warning about the early content before I’d begun reading.

This is why I firmly advocate for the use of content notes/trigger warnings in books, even ones that are promoted as romantic comedies. Perhaps more so in those cases. I’d have felt better prepared than I did, if there had been one here. Take note, authors and publishers both!

To sum this one up, because this turned into a bit of a ramble, didn’t it: I would certainly recommend this book. Even with my reservations, I appreciated it because at the time I read it, I was brain-deep in a lot of very self-reflective feelings about my own past relationships, not to mention my own queerness. It’s not entirely a coincidence that I finished reading Love Bites shortly before I wrote a post here, talking about both of those things.

So for that, I am grateful. I think I’m probably going to go back and read it a second time soon, to see what I make of it all now that I know the score. But regardless of what second thoughts might form, this was a book that I needed, in a time when I certainly needed it. Maybe you do too? If so, and if you give this book a shot, come back here and let me know what you thought.

Once again, thank you to Jo Fletcher Books for the review copy; this review is rambly but it is entirely honest.

If you want more points of view, you can check out the other bloggers on this tour: 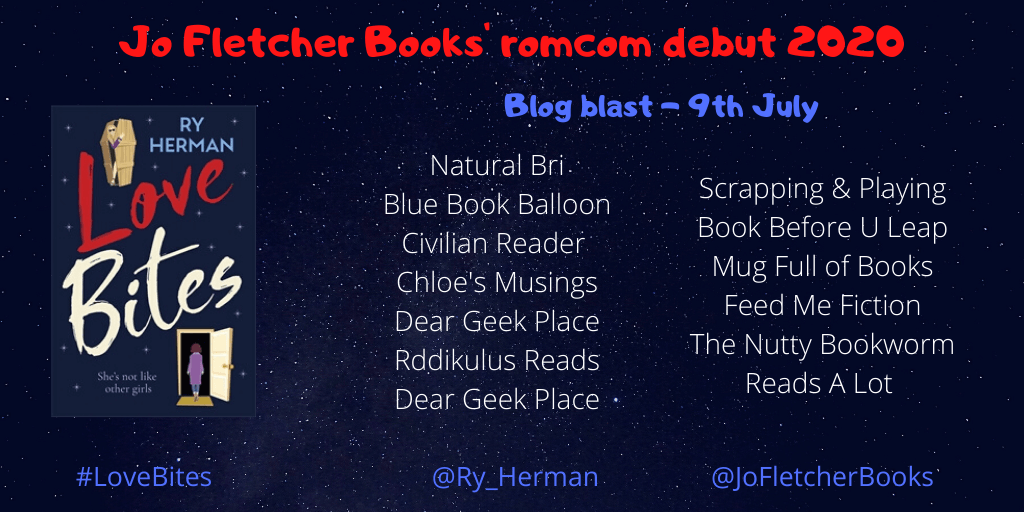 The course of true love: The Bitter Twins, Part 3