The Worst: Discussing Dreams of Gods and Monsters, Part 4

In this part of the book, Eliza finds out where The Suits were taking her, and is left with an existential revelation (or several). Meanwhile, Karou comes up with a plan and convinces the others to go along with it – but a surprise attack throws everything into chaos…

I AM NOT OKAY.

So I am halfway into this book now, and things are heating up even as they leave me with even more questions and I honestly don’t know how much more I can take. WHAT IS GOING ON HERE.

Let’s discuss Eliza first, because her story is getting darker by the minute here. After she and Dr Chaudhary are taken to Morocco to study the bodies of chimaera (not that they know this is what they are, of course) left in a mass grave at the kasbah, their private conversations turn to such questions as heaven versus hell, science versus religion, and the ways in which those dividing lines might blur. It’s the sort of theological debate I love to consider, and I appreciate that Laini Taylor took the time to examine those blurred lines. In particular, the observation that it’s perhaps best that they respect the NDAs they were made to sign because if the general global public ever find out that a Muslim country is/was full of “demonic” creatures when Jael is out there making public speeches about “Beasts” coming for them? That has Bad News written all over it, surely.

But I’m here to talk about Eliza, because it’s in this environment, after this huge revelation and all the implications it brings about other worlds/universes, that Eliza herself comes to realise that the dreams she’s been having weren’t visions of the future at all, but memories of … past lives?

I’ve seen other universes. I’ve been to them.
And I destroyed them.

OK, so we know(?) that Eliza is neither a Seraph nor a chimaera. She’s human. Right?

But I can’t even be sure of THAT because we thought Karou was only human until she turned out to be a chimaera resurrected in a human body. So it’s entirely possible that whatever Eliza is now, she was something very different in another life. And given the sheer scale of these revelations she’s having about herself and what she used to be, and what she might have done … I don’t know enough to make a solid guess but I’m starting to suspect that whatever it is, it might be connected more to the seraphim. Specifically – and here’s where my guess gets a bit wild – Razgut? Or at least, whoever/whatever Razgut was before he became Razgut.

… Is it too wild to guess that he might have once gone by the name Lucifer? And that Eliza was also an angel once, and the chimaera don’t (or didn’t always) have a monopoly on resurrection magic?

God, this bloody book. LET’S MOVE ON BECAUSE I NEED TO KEEP READING.

A place of isolation

Moving on, I want to discuss the Stelians and their stealth mission in this part of the book. Setting aside the fact that Akiva literally came within a breath of being silently assassinated because THAT IS KIND OF TERRIFYING YO, I want to touch on this idea Scarab and her people have, that this war is none of their business and that they can just continue to have nothing to do with it. That if they don’t get actively involved and stick to only observing from a distance, it will never touch their shores and their lives can go on as before.

I’m going to take another wild guess and say that plan is going to get shot all to hell. First of all, Jael is definitely not going to just whistle and walk on if he knocks on their door and nobody answers, so to speak.

Second, Scarab honey, you are literally sneaking around among a rebel force and you almost just murdered one of their leaders. If that’s not getting involved I don’t know what is. Oh, and look out above.

Yeah, that kind of plan just never works. Ever. So the question now is, what will this young, untested queen who has to admit to herself that on some level she DOES want to get into a fight, choose to do about what’s going on – and about what’s going to come for her people if these rebels don’t win? And that’s all before we even consider that the rebel leader she nearly killed is kin to one of her own people, and is using dangerous amounts of Stelian magic without understanding it.

Time to pick a side, Your Majesty.

The urn is full

So I mentioned that the book’s halfway point meant full-on drama, and with Jael having orchestrated a surprise attack on the chimaera rebels, the drama is cranked right up. Karou’s plan for herself and Liraz to reach out to Jael to try to end the war without more bloodshed (and that surely could not have been the whole of the plan?) is almost foiled before they even get off the ground – literally. She does make it through a portal back to Earth, but in the sudden onslaught it isn’t Liraz who goes through with her. Liraz literally kicks Akiva out of Eretz, forcing him to take her place on that mission while she stays behind to fight off the seraphim, and

This is messing me up. The chimaera are not going to survive this in anything like their original numbers, are they? But will Ziri survive? Will Liraz?! Oh gods and goddesses, I hope so because I am SO NOT READY FOR THEM TO DIE THIS WAY.

So, yeah. For the record this sort of plot twist trope, I Shall Do The Fatally Heroic Thing So You Don’t Have To, is an excellent way to destroy me when it’s played right. And apparently Laini Taylor just played it right.

*Flails self to pieces*

I need to keep reading. 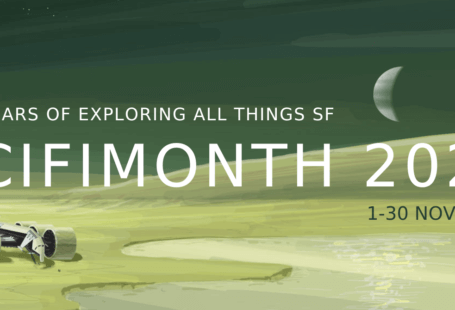