The Universe Is What We Make Of It: The Long Way to a Small Angry Planet, Part 1

Following on from Sunday afternoon/evening’s successful first Twitter chat for the Sci-Fi Month readalong for this book, I decided to recap and expand on the excellent questions put forth by @joriestory, as well as revisiting the reasons why I love this book so much.

There will be spoilers aplenty, though, so if you haven’t read this book, please be warned!

This post will cover the beginning through to the end of “Port Coriol”.

What personally struck you about the contemplation and introspective musings about the vulnerability and the distances of spacer life vs living planetside? Would you adjust or would you prefer one over the other?

This is a really good question, because I’m honestly not sure about the answer! Being an introvert who does not get on well in large groups of people or in crowds, I can see the appeal of only having a handful of people to interact and become familiar with, and also having a quiet space in which to do it. I love the idea of traveling aboard the Wayfarer, in particular – the ship sounds perfectly suited to my needs!

That said, it’s still life in a bubble, confined with a select group of people. Introverted or not, I don’t know if I could go on a long haul without being able to connect to some sort of wider world, or having access to grounded, open spaces. Space travel is cool and all but the idea of only having empty space in which to take a ‘walk’ is kind of terrifying!

Q2: Before Jorie heads off into #smallangryplanet to catch up to you guys this Q really stood out to share

Do not judge species by preconceived social norms – is a great bit of advice and a forethought on forward motion towards tolerance and acceptance. What were your thoughts?

Now we’re getting to my favourite thing about this book, because it would have been so easy for the author to take the basis for her worldbuilding – the end of our world – and create a dystopic sort of setting for the story. The fact that she took a disaster scenario and turned it into an opportunity for humanity to better itself, to broaden social awareness in space thanks to all these alien species, alien cultures, and giving humanity the chance to really put its violent history behind it – all of that is to her credit. She really put the work in on building this universe. For me, though, the thing that makes it truly impressive – and I discussed this with my fellow book clubbers on Twitter – is that even though humanity is thriving in space in ways it never had before, Humans are still not without their flaws. We see it in various thought-provoking ways. Rosemary is initially confused by Sissix and by Aandrisk culture, so much so that she has to work to really wrap her sheltered mind around it all (and she does!). The presence of the Gaiist ‘cult’, a group of purist Humans who remain determined to uphold the ‘superiority’ of their Earth origins even while living in space, is every bit as Human as our capacity for tolerance and acceptance of others.

So the utopic aspects of Chambers’s worldbuilding don’t negate the possibility that, for all of our progress, Humans can still struggle to adapt or, in the case of the Gaiists, still be assholes to our space neighbours. All of these things are Human, after all.

Did anyone notice when Lovelace and Jenks were talking about AI vs human dynamics, Lovelace mentioned souls were organic rather than divine? I thought it was an interesting sub-focus and diversion from main plot to discuss.

This was an excellent question, and again, I really appreciate that Chambers took the time to explore it via Lovey and Jenks’s relationship. Any kind of romance between a human and an AI could so very easily come off as disturbing, but Lovey is written so thoughtfully, and as an undeniable part of the Wayfarer crew, that it’s more thought-provoking than anything, for me. I noted on Twitter that it makes perfect sense for Lovey to think of souls this way. Being an AI, it stands to reason that something to closely linked with being human would strike her first as a physical aspect rather than something as intangible as a divine hand at work. It’s the age-old logic vs. faith debate, and I really enjoyed seeing it raised so seamlessly in this way.

Share your thoughts on the FISHBOWL experience Rosemary loved her first
day on Wayfarer and/or what your impressions of Port Coriol were as we follow along with the crew. We'll discuss wormholes, etc next week!😉🙌

The Fishbowl was the perfect way to let Rosemary find her feet aboard the Wayfarer. I won’t go into spoilery detail about her backstory here, because all of that is yet to come, but once again we’re seeing an example of Chambers having two choices of which direction to go in – dark and gritty, or comforting and hopeful – and taking the brighter path. The novel opens with Rosemary drifting alone through space, troubled by the past she’s running away from – but she finds comfort with kind people in a welcoming space, and it’s this which sets the tone for the story to follow. This is the reason I love the book so much, even (especially) on re-reading: it’s like a warm blanket and a cup of tea for my soul.

And as for the ‘Port Coriol’ chapter: this is probably my favourite chapter in this part of the book. All the vividly described sights, sounds, even the smells; the hotchpotch of various species all intermingling, the cheerful chaos of commerce – it delights me every time! I would absolutely want to visit a place like this, introvert or not!

And on that note, I’m going to sign off and get back to reading. Jorie and I will see you all back on Twitter this Sunday for Part 2, where we’ll be reading through to the end of “Hatch, Feather, House” – and there’s even more goodness awaiting us. Just remember the hashtag: #smallangryplanet!

Top Ten Tuesday: One Day, All This Will Be Mine

Tremontaine S4E8: A City In Crisis, by Karen Lord 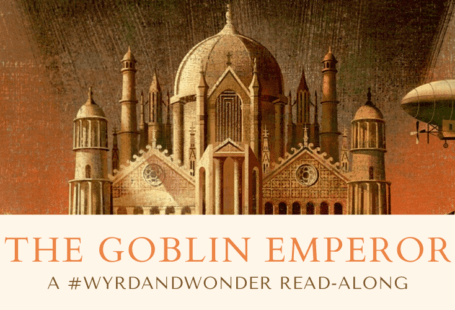 2 comments On The Universe Is What We Make Of It: The Long Way to a Small Angry Planet, Part 1