Next generation: The Obsidian Tower by Melissa Caruso

I do love a good rendition of I Waited Forever For This And It Was Worth It.

Let’s talk about The Obsidian Tower. 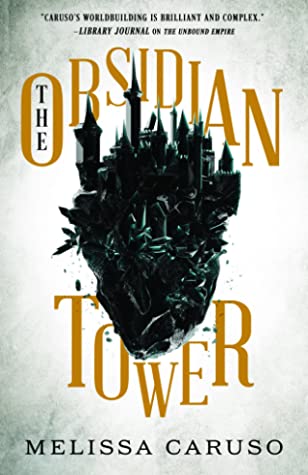 Set 150 years after the events of the Swords and Fire trilogy, The Obsidian Tower brings us across the border from the Serene Empire into Vaskandar, where we meet Ryxander. Ryx is the Warden of Gloamingard, entrusted by her grandmother, the Lady of Owls, with protecting the Black Tower. This ancient artifact’s origins and purpose are shrouded in thousands of years worth of mystery, but the Lore surrounding it is clear: the Door must remain sealed.

Only it’s not so clear as Ryx thinks. As it turns out when the Door is accidentally opened, there’s much more to the Gloaming Lore than she ever imagined. And yes, it cranks the creepy up to eleven.

This book hit the mark in a number of ways for me, so I shall take them one by one and, in true fangirl style, enthuse about all the reasons I loved it. Because that’s what I do around here.

Melissa Caruso puts a little twist on this trope, given that Ryx does not lack for relatives, but in the spirit of things, she finds a group of friends in an unlikely time and place, and they bond in ways she never expected to be able to bond with anyone. This is a surefire way to hit me in the feels, and Melissa is merciless about it. And on the subject of that found family…

Building on the worldbuilding

The Rookery is, if I recall correctly, a newly explored concept in the world of Eruvia. Teams of investigators who report to both the Empire and to Vaskandar, but ultimately answer to neither? Introduced via a mixed-bag team of people with their own quirks, foibles and flaws, who bicker and banter endlessly but will end you if you mess with any of their own? Of course I am here for it.

Oh, and it seems more than one of them is openly queer. Kessa, their charismatic and daring spy, is asexual (in all but name, but this is a secondary-world fantasy novel so I’ll allow it). She also gets her romantic turn before the end (after discussing those matters of the heart with Ryx, who appears to at least be bisexual herself?) and I won’t say more than that here because spoilers, but trust me. It gave me the happy fluttery feelings to see queerness embraced so openly, and handled well.

Sympathy for the Devil

I have wanted a story set in Vaskandar ever since Amalia Cornaro visited that enemy territory in the first trilogy, and while international diplomatic relations appear to have improved significantly in the time since, there’s still a lot to be said for Vaskandran traditions. By which I mean: a nation ruled by Witch Lords is inevitably going to be incredibly intimidating and intriguing, and this deeper dive into their world absolutely did not disappoint me. Better yet: while there is plenty of the creepy gothic aesthetic and Dark Overlord villainy I was craving, there’s also plenty of quirky colour and warmth to be found.

Looking at you, Ardith. “Fox Lord” is right. Ahem.

Returning to the subject of tropes that will immediately push the right buttons for me: not only are there plenty of the sort of tense, vital political machinations that I loved about the first trilogy, they come hand in hand with an honest-to-goodness murder mystery. In a creepy castle decorated with obsidian and bones. And no one can leave until the answers are found.

My only regret about this is that I didn’t have popcorn to snack on during the binge read that ensued.

I can’t talk about the elements of this book that worked for me and not take my hat off to Melissa for giving us a story about a new generation finding their place in a world built – and still ruled over – by their elders, who are perhaps not doing the best job possible where the interests of the next generation are concerned. Ryx was raised to obey her family’s Lore and trained to do what they’ve always done. She’s never questioned that responsibility or the wisdom of obeying the Lore, even when it’s painfully clear that even her own family don’t all see her as worthy or deserving because of her magical “shortcomings”. It’s only when she meets a group of people who accept her as she is, open her mind to a wider (better) world, and endeavour to help her find ways to live as she is without having to isolate herself, that she really starts to come into her own – and that, dear readers, is what really did hit me squarely in the emotions.

You could say I can relate. And I suspect many more people could too.

In summary, this was a (sort of) return to a familiar world and a familiar story skeleton (heh), that comforted and pleased me enormously – and in today’s real-world political climate, that sort of comfort is not something I take for granted.

But at the same time, it was a new approach to those familiar elements. It’s fresh meat on old bones in all the best ways, and I cannot overstate how excited I am to see what Ryx and company get up to next. And in the meantime, I believe there just might be a reread of Swords and Fire in my very near future…

2 comments On Next generation: The Obsidian Tower by Melissa Caruso