Huzzah! It’s time for the second of today’s Readalong posts. This time I’m discussing Guy Gavriel Kay’s The Summer Tree, as hosted by my good friend imyril over at There’s Always Room For One More.

(It is almost 10pm on this Sunday eve. I have had a literal full tankard of cider so you’re getting the fun stuff tonight. I will try not to swear. Let’s do this.)

As previously mentioned, this readalong is being organised by imyril at There’s Always Room For One More, and she is our hostess with the mostess… questions, this week! Let’s cut to the discourse chase, shall we?

How are you reading along with us? Is this a first time or a reread? Show us your book cover!

Ooh, cheeky. But I’ve had a jar, so why not. We’re all friends here. *Flourish* 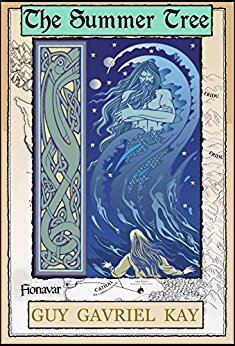 Look at that Celtic style. Look at it. Don’t you love it? I love it.

ANYWAY. Yes. First time reader! Woot. You get my impressions fresh off the bus, baby. And I’m reading on my Kindle for the time being, but if all goes well enough there may be a hunt for a print copy in my near future…

The prose style is as distinctive as calling the prologue an overture.  How are you finding it?

Oh, this might be interesting. I have a couple of thoughts on it. First – I could certainly understand why some readers might struggle with it, heh. ‘Purple’ might be putting it mildly? I do feel that some relatability to the characters may have been sacrificed in the name of adhering to this writing style? But you might infer from my manner of phrasing these observations as questions that I’m not fully convinced of that yet?

What I do think, and this is not necessarily a bad thing at all (at this point), that the writing style strikes me as very much akin to a bardic tale style of storytelling. We get insights into these characters and we get sparks from their interactions, but we’re getting them from a third-person narrator perspective, in a way that a) reminds me of the Dragonlance Chronicles, and no that’s not a bad thing; and b) always makes me fear a little bit that the writer is taking a risk in telling their story this way. It strikes me as an approach that may or may not work out well, and at this stage I’m not DNFing but I’ve got a way to go before I’m fully sold on it, as well.

THAT SAID. I’m into it, from what I’ve read so far. We ARE getting sparks of personality and a sense of character dynamics, and I do like/am intrigued by these people! I want more. So, for now, I’m in. What can I say? Purple is my favourite colour.

Each visitor gets a moment to define them before they arrive in Fionavar. What are your impressions of our travellers? Any you particularly like/dislike?

I’m still feeling some of them out at this stage, to be honest; despite my optimism I do feel like the writing style got a little bit in the way of some character intimacy that would have been very welcome in these opening chapters; the introductory aspects felt a little bit clunky and, dare I say it, forced, before the core group arrives in Fionavar.

But then. On the other hand, I got the very intriguing sense that being in Fionavar is going to make life very interesting in very unique ways for these individuals, and I’m definitely interested in following them to see where they go.

I really liked the chess game, and the conversation, between Paul and Aillel toward the end of this section. Paul stands out as a character I want to know more about, and I suspect I might sympathise most strongly with him as more of his backstory comes out. The king, as well, is very fascinating to me. I appreciate that he’s not as deep in his dotage as he might have seemed at first! I have a definite soft spot for wily, clever old men, and this one already has my sympathies – though we’ll see if that sympathy holds up from here…

… And what do you make of the characters and politics of Paras Derval?

Hey. Look. I love me some good political intrigue, I do. And I am 100% up for getting some from this crowd (not like that). But again, my (mild!) concern is that the flowery prose might trip up my efforts to just sink into this and enjoy it? But again, we’ll see!

That said, I am very fascinated by these people. Loren feels a little bit Plot Device to me, but the tidbits of information about his relationship to Matt has definitely got me curious. I want to know that story of how they met! As I said before, I am intrigued by Aillel. There’s a certain Grima Wormtongue type that I wouldn’t trust further than I could throw him, let’s be real here. And then there’s Jaelle. Dear teacups, I want there to be more to her than meets the eye. But yeah, I don’t trust her at all either. She is Very Angry, isn’t she. Yikes, Jaelle. Yikes.

How/Do you judge Loren for keeping so many secrets from the visitors?

… Kind of, yeah. I mean. He’s the Font of Sage (ha) Wisdom here. That implies he’s wise enough to judge what’s good information for them to have. The thing is, and I’m sure they might agree, that ANY information might be good to have at this stage. They don’t know anything, and the ones that do are running on some sort of unknowable instinct that they can’t understand without help. SO MAYBE HELP THEM OUT, LOREN.

But this way certainly makes for a more intriguing story, doesn’t it? Dangit.

And that’s it from me! For now. But you can check out what my co-readers have to say, either by requesting an invite to the Summer Tree Readalong Twitter Community (if you’d like to join the fun!) from @imyril, or by following the event hashtag #WyrdAndWonder.