Well, we’ve all survived our first week of exploration and the reports are in! Let’s round up what everyone offered, and get to comparing our notes…

First up came a hefty influx of TBR/intro posts, from newcomers and veterans alike:

S Naomi Scott, David at FanFi Addict, Caitlin at Realms of My Mind, Lorraine at Geeky Galaxy, Elena Square Eyes, Alex at Book Blurb, Rowena at Beneath a Thousand Skies, Joanna Maciejewska, Ollie at Infinite Speculation, Anouk at Time for Tales and Tea, Annemieke at A Dance With Books, Tammy at Books Bones & Buffy, Amanda at Classy x Book Reviews, Molly’s Book Nook, Lisa at Way Too Fantasy, Mervi’s Book Reviews, Suzy’s Cozy World, Jessticulates, JonBob at Parsecs & Parchment, Lauren at Always Me, Mayri the Book Forager, Infinity’s Bookshelf, Maryam at The Curious SFF Reader, Maddalena at Space and Sorcery, Mogsy at The BiblioSanctum, Louise at Monstrumology, and Arina at The Bookwyrm’s Guide to the Galaxy – and then there’s my own, and imyril’s at There’s Always Room For One More.

Then we got into some weekday-themed features!

Tammy also put forth a Future Fiction post, SJ Higbee gave us an Adrian Tchaikovsky edition of Covet the Covers, and we got a juicy trio of features from Rin at The 13th Shelf, who presented an Artist Showcase on Anthony Brault, a sci-fi themed Ambient Track, and Literary Finds: 2046 Science Prints.

In the interviews/guest posts log, there are entries from imyril at There’s Always Room For One More, who played a round of Six Degrees of Separation with none other than Peter F Hamilton; and Arina at The Bookwyrm’s Guide to the Galaxy hosted Sarah Mazza, who wrote about ‘The Future of Hope and Human Connection: I Dream in Color‘.

The first week of our Golden Witchbreed Read Along also saw imyril, Mayri and myself discussing Parts 1 & 2 of Mary Gentle’s SF classic.

And that’s a wrap for this week’s log, but don’t forget to check out imyril’s Mission Log for a round-up of reviews, lists and discussion posts!

Right, now it’s time to dive back into my reading… 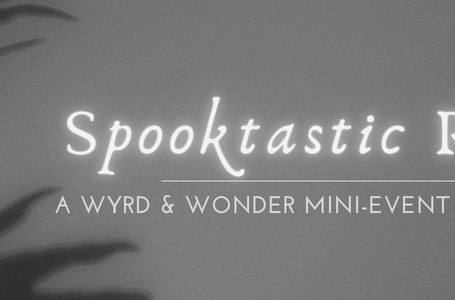 Appearances can be deceiving: The Bitter Twins Read-along, Part 4