Gay space princes. Arranged marriage and romantic misunderstandings. Political intrigue. Reader, I jumped at the chance to read this long before the book actually ended up in my hands. I thought I was ready. I was not ready.

Please note that this review contains discussion of abuse, and mild spoilers for one character’s backstory. 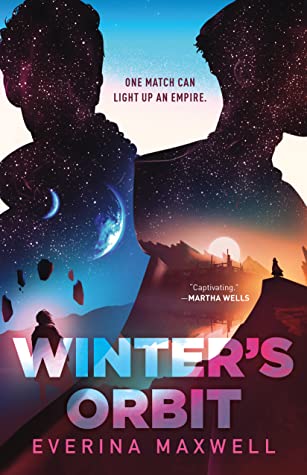 Prince Kiem, a famously disappointing minor royal and the Emperor’s least favourite grandchild, has been called upon to be useful for once. He’s been commanded to fulfill an obligation of marriage to the representative of the Empire’s newest and most rebellious vassal planet. His future husband, Count Jainan, is a widower and murder suspect.

Neither wants to be wed, but with a conspiracy unfolding around them and the fate of the Empire at stake, they will have to navigate the thorns and barbs of court intrigue, the machinations of war, and the long shadows of Jainan’s past, and they’ll have to do it together.

So begins a legendary love story amid the stars.

With a collection of tropes like the ones dropped in that blurb, it was a given that I’d be excited to read this book. I read a lot of romance, and I love a good political intrigue/space opera drama. Getting both in one book was a no-brainer of a purchase, and it absolutely didn’t disappoint me in either sense. I had expected a book that would be a joyfully good read, and I got one.

What I wasn’t completely ready for was just how thoroughly this book would get its hooks in me, emotionally.

Certain elements of the plot, and of character backstory, were not difficult to suss out ahead of the reveals that were certainly coming. This is not a story that rides on shocking plot twists; I wasn’t terribly surprised by them, but what gets me is how invested I was all the same.

Not every plot development or character reveal has to depend on being shocking to have an impact, and Everina Maxwell plays her twists and reveals skilfully enough that the impact is considerable. It helps that I was able to relate, on an almost painfully personal level, to a fair bit of what Jainan goes through in the book. I worked out early on that perhaps not all was entirely well in his world or in his previous marriage, and the more I read, the more painfully obvious that became. By the time my suspicions were confirmed, I was invested enough that I felt, and felt deeply, for his pain. I’ve been in an abusive relationship, and while I was never precisely physically harmed, I recognised enough of the signs to empathise with Jainan, especially as more of the ugly details come out later in the book.

(For a more detailed note on this type of content in Winter’s Orbit, here is a – spoilery – content warning for the book on the author’s web site.)

What saved this book from becoming too difficult for me to keep reading was the balance that is provided, in the form of Absolute Cinnamon Roll Prince Kiem.

Kiem is loud where Jainan is quiet, impulsive where he is cautious, and wears his heart on his sleeve while Jainan tries (heartbreakingly hard, at times) to keep his emotions to himself. These two should not gel as a couple, on paper – but we know that’s not how romances work, right? They are perfect for each other, but it takes a sweetly aggravating long time for them to figure each other out enough to begin to communicate well. On the other hand, theirs is such a wonderful match that by the time they do get past those hurdles, it almost feels as though they’ve been together forever.

This is how you write a soul-mate type of love story, and as a side note – if that sounds like your cup of tea and you haven’t yet watched The Untamed, you should get on that. Kiem and Jainan remind me so strongly of Wei Wuxian and Lan Wangji that’s no surprise to me that I fell head over heels for them.

But this is more than just a love story – there is an unapologetic message here about the dangers of Imperial control over planets (read: nations) struggling to gain more independence. The Iskat Empire doesn’t read as openly dictatorial, exactly, but it’s clear in their more subtle moments of presumptuous control/dismissal that there’s something potentially very insidious there. Overall, there’s a sense of very timely commentary on real-world politics here that’s hard to miss, even as it doesn’t overshadow the very clear message of hope that’s really at the heart of this story, in both its political and romantic senses.

And it’s that hopeful message that really hit home with me. I am not well-equipped to deal with anything of a grimdark nature, and so I deeply appreciated the lighter touch that the author uses to tell this story. With that in mind, though, what’s most impressive is that the sense of gravity to these events isn’t lessened by that lighter touch. Maxwell makes us care about her protagonists, gets the reader invested, and then brings the threats to their world down to their doorstep right on emotional cue.

The last book that packed this particular kind of punch for me was probably The Long Way to a Small Angry Planet by Becky Chambers, and that is by no means a throwaway comparison. I loved that book with all my heart, and I still do. Something tells me I’ll be feeling that way about this one in a year or two.

By the end of this book, I was wrung out and deeply gratified in equal measure. I have nothing but respect for the story it tells, and the way in which Maxwell chose to tell it. Winter’s Orbit has set a very, very high bar for my favourite reads of 2021, and it’s only February.

I can’t wait to pick it up for a reread.

1 comments On All heart: Winter’s Orbit by Everina Maxwell