In the second half of Alanna: The First Adventure, things are still not what I expected. But this is everything my heart needed. 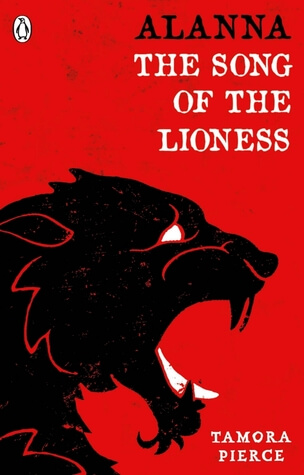 “From now on I’m Alan of Trebond, the younger twin. I’ll be a knight.”

And so young Alanna of Trebond begins the journey to knighthood. Alanna has always craved the adventure and daring allowed only for boys; her twin brother, Thom, yearns to learn the art of magic. So one day they decide to switch places: Disguised as a girl, Thom heads for the convent; Alanna, pretending to be a boy, is on her way to the castle of King Roald to begin her training as a page. But the road to knighthood is not an easy one. As Alanna masters the skills necessary for battle, she must also learn to control her heart and to discern her enemies from her allies.

“I’m not seeing any of the things I expected actually coming to pass.”

This was me, this time last week after reading the first half of this book and being delightfully surprised. I can report, still with great delight, that the surprises kept coming.

Rather than following the template of any sort of traditional high fantasy adventure story, Alanna is more of a character study, a quieter journey from childhood to something approaching adulthood, in which our heroine’s battles have less to do with the threat of overwhelming evil (though that is present and … sort of accounted for?) than with the internal struggles born of having her expectations in life, and her preconceptions, constantly challenged. And in the best way.

Masculinity … Not So Fragile

The cast of characters in this book is predominantly male; there’s no escaping that, but rather than being a questionable decision on the author’s part, it’s deftly and cleverly played up as a key factor in Alanna’s personal growth. In the first half, we saw her (literally) tackle the problem of Ralon’s harrassment in a physical manner, only to be left with the problem of all of her internalised insecurity. Alanna is learning that her will alone isn’t enough to take her where she wants to go in life; she has to work hard for it, and she feels her physical disadvantages so keenly that she honestly can’t comprehend any of her friends seeing things any differently – and yet, they do. Oh, how they do.

I would like to take this moment to appreciate Raoul. He, like the rest of his friends, is good and pure and a shining example to young men everywhere. This exchange, and the underlying story that it touches upon, both broke my heart and mended it all at once. ALANNA YOU HAVE SUCH GOOD KIND FRIENDS IN THESE BOYS. YOU CAN BELIEVE WHAT THEY’RE TELLING YOU, HONEST.

So, yes, the world might seem like it’s full of prejudiced assholes, but for every one of those, there are half a dozen more people who are ready to help you fight them.

(Whichever world you think I’m talking about? Yeah. That one.)

(Sort of) on the other hand – the persistent display of support and honest friendship from these boys made me more nervous for the reveal of Alanna’s gender, which I was already assuming would come. Cynicism was telling me that their admiration for their friend wouldn’t survive the revelation, but at the very least I could tell myself that they’d be more upset about the deception than the fact that Alan is really Alanna.

And there, once again, is where I feel like Tamora Pierce played a neat trick on her readers. The reveal does come, but it comes along in such a way that Jonathan, who’s there to discover the truth in the moment, is forced on the spot to decide what’s more important: the fact that his friend has been deceiving him or, you know, the fact that they’re facing down a bunch of murderous immortal bad guys intent on consuming their life force.

Priorities, Jon, do you have yours straight?

It’s a sly little situational dilemma, and it works because it puts the entire question of Alanna’s secret in the only perspective that really counts. The Ysandir (who pretty much come into this story out of nowhere but they’re creepy as hell and I kind of like that) see through Alanna’s facade, and they’re delighted because they see her gender as something to be used against her. She’s a girl, therefore she’s weak; all they need to do is reveal her true nature and the opposition will crumble, because who wants to fight alongside a girl? Surely it’s a losing proposition! Their victory is inevitable now!

… This is all misogynistic horseshit, of course (and bless you, Jon, for not falling for it), but it’s voicing precisely Alanna’s fears – that if anyone finds out she’s a girl, she won’t be taken seriously anymore. And the Ysandir force her secret out of her in the worst way, by literally stripping away her clothing so that she has no way to hide anymore. The attack by the Ysandir becomes abuse in that moment, and this is what Alanna has been so afraid of. She can only be strong if she’s a boy. Can’t she?

But it all works out, because this is not an Ursula Le Guin YA story (yeah, Earthsea, I’m looking at you). The power is literally within Alanna and Jonathan both, and they use it against their enemies together. They face down these abusive, power-mad villains while holding hands and I can’t take it. My feelings can’t take this, you guys, it was too perfect. I want to round up as many copies of this book as I can find and go out and just start throwing them at people. I want to leave them on doorsteps down in Westminster. I JUST LOVE IT SO MUCH WHERE HAS THIS BEEN ALL MY LIFE.

That said, however … the story isn’t over yet, as its (somewhat abrupt) ending most definitely demonstrates. Some questions have been answered, although some of Alanna’s issues may remain pending her and Jonathan’s return from the Black City. But other questions definitely remain, namely those regarding Roger of Conté. As the highly acclaimed royal sorcerer tasked with teaching Alanna and company to use magic, he immediately struck Alanna (and myself) as off-putting, somehow. There was just that indefinable but undeniable whiff of Something’s Not Right about him, and even though I’m left uncertain about his nature or his motivations, I definitely don’t trust that man. Jonathan does, and this alone is why I’m unsure of him, but Jonathan is not exactly unbiased – Roger is his cousin, and he’s spent a lifetime trusting him. But does that mean Alanna’s gut instincts are wrong?

The book ends on this questioning note, which naturally leaves me assuming that the matter is far from resolved. Will Roger turn out to be a royal snake in the grass? Or is Jonathan’s assessment of him true? I don’t know, but I’m dying to find out.

It is going to KILL ME to have to wait for August! AUGH.

I Was Not Ready: Alanna, Part 1

On the Horizon: Upcoming SF I’m excited about